"Hubert van Eyck, the greatest painter ever, started this work; his brother Jan, who came second in painting, completed this arduous task at the request of Joos Vijd. He entrusts this work to you on 6 May 1432. Admire what they have accomplished.“

In 2012, extensive restoration treatment was required that will last until the end of 2024. Carried out in the Museum of Fine Arts in Ghent by the Royal Institute for Cultural Heritage and with financial support from the Flemish Government and the Baillet-Latour Fund, the old hardened varnish layers and overpaintings were painstakingly removed.

Thanks to the restoration, it is therefore the first time since the 16th century that the original paint layer of Van Eyck can be viewed.

Helene Verougstraete and Wim Verbaal, The Ghent Altarpiece and the Inscription on the Cloths of Honour behind Mary and John the Baptist, Ghent, Saint Bavo’s Cathedral, 2022, 44 pp. 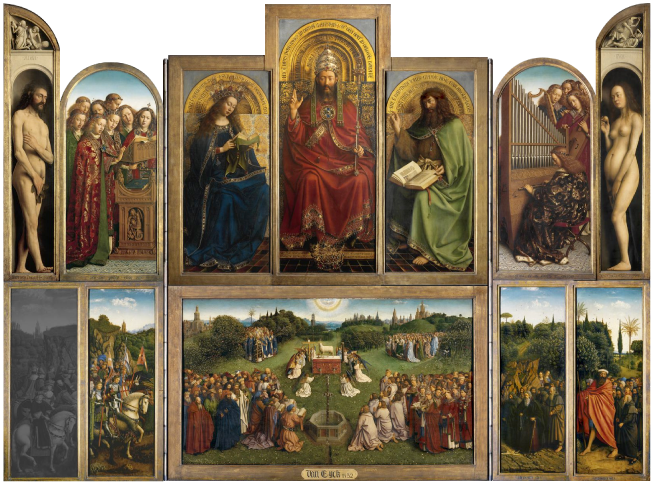